The United States is home to over 150 species of mosquito. Some of those species are widespread, existing across most of the country. Many others are more localized, covering a more specific territory. In Georgia there are three main types of mosquitoes you will encounter. There are other species present, too, but these three account for most of the mosquitoes you will come into contact with. These species are the Aedes mosquito, the Culex mosquito, and the Anopheles mosquito. 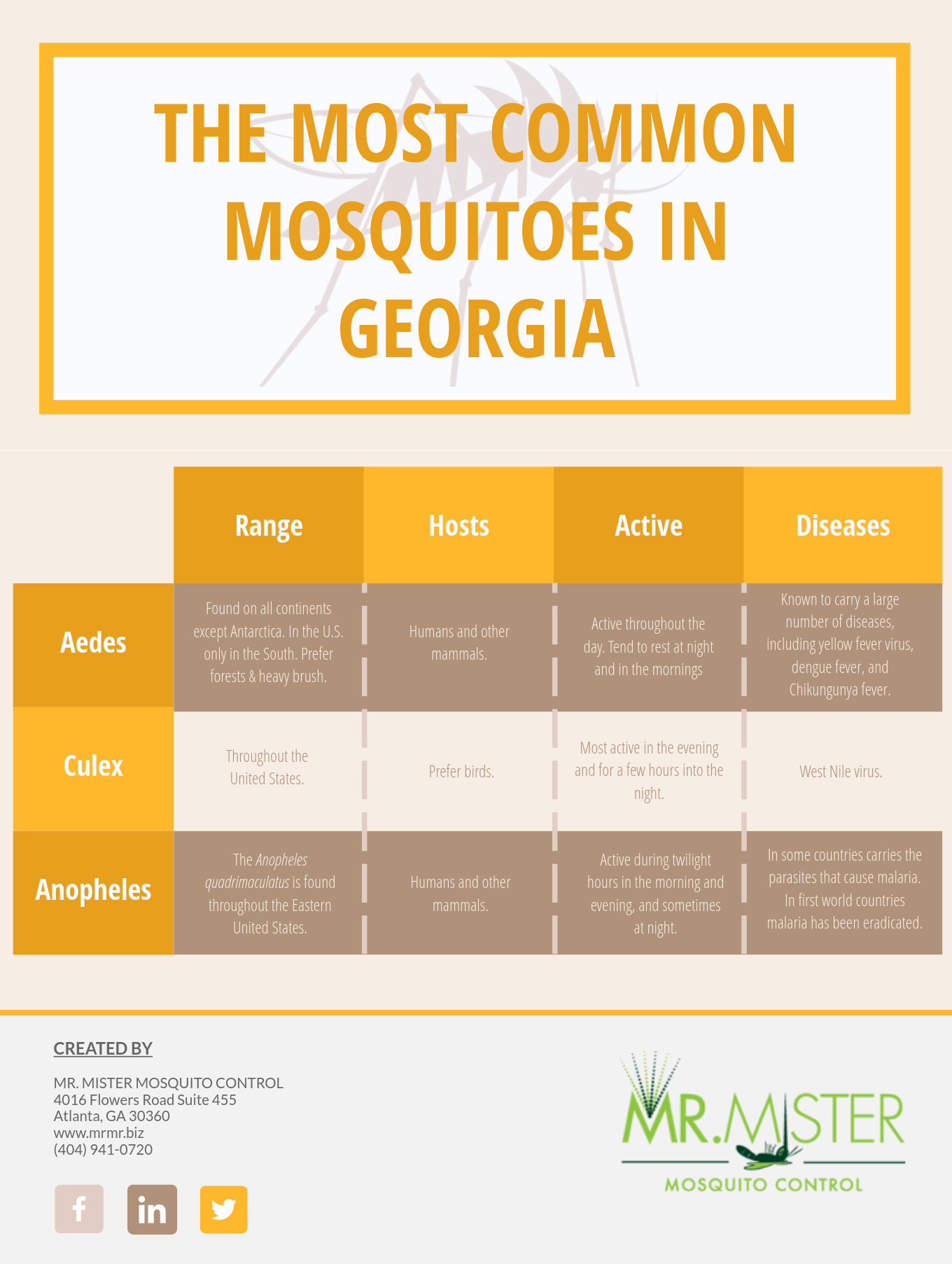 Mosquitoes in the Greater Atlanta Area

Atlanta is a city known for its natural beauty. It is one of the most heavily wooded major American cities. Its tree canopy is great for protecting residents from the sun, freshening the air, and making the city more pleasant on the eye. However, that tree canopy and the other natural features of the city also make a great home for animals, insects, and mosquitoes in particular.

The warm, mild climate in Georgia makes it an ideal habitat for many species of mosquito. Our winters are relatively short and mild compared to much of the country. So Georgia sees more than its fair share of mosquitoes.

Mosquito season begins when female mosquitoes fertilized before the colder months reanimate and begin to lay their eggs. This usually happens when the weather reaches above 50 degrees fahrenheit for a number of days in a row. In the Greater Atlanta Area, that can happen as early as late February. In most years mosquito season begins no later than mid-March.

There are three genera of mosquito that account for most of the mosquitoes in Georgia. These are the Aedes mosquito, the Culex mosquito, and the Anopheles mosquito. Learning the habitat, behavior, and feeding patterns of these species of mosquitoes can help homeowners understand how to treat them.

The Aedes genus of mosquitoes was originally found in tropical and subtropical zones. But it is an aggressive invasive species and has spread considerably. Today it is found on every continent except Antarctica. The Aedes albopictus mosquito is from Southeast Asia and was introduced to the New World relatively recently. It is presumed to have traveled via the used tire trade. The Aedes aegypti originates in Africa. Both types of mosquito are found in the United State only in the South. This puts Atlanta right in the way of these pests.

Aedes mosquitoes are known to carry a large number of diseases, including yellow fever virus, dengue fever, and Chikungunya fever. They are active throughout the day and tend to rest at night and in the mornings. They are most common in forests and heavy brush.

Aedes mosquitoes don’t fly very far. Their lifetime flight radius can be as little at 650 feet. For this reason, attempts at controlling Aedes mosquito populations should be centered around places where humans live. The mosquitoes will not travel far from their hosts.

Culex is a broad genus of mosquito. The most common type of Culex mosquito in the United States is Culex pipiens. In fact, it is so common that it is informally referred to as the common house mosquito. It is most active in the evening and for a few hours into the night.

Culex mosquitoes mostly feed on plant nectars and other sweet plant juices. In fact, male mosquitoes feed on these exclusively. Female mosquito do take “blood meals”, but these meals to not actually provide nutrition to the female mosquito. Instead, the proteins and other components in the blood are used to produce eggs. The eggs are laid in still water where they will hatch into larvae.

The most common host for the Culex pipiens is not humans. They mostly go after birds. By feeding on birds, these mosquitoes often pick up the West Nile virus, which they can spread to humans. The West Nile virus produces no symptoms in most humans who are infected. However, in about 1 in 5 cases it can produce a fever with other symptoms. These symptoms include headache, body aches, joint pains, vomiting, diarrhea, and rash. In rare cases, about 1 in 150, it can lead to nervous system diseases such as encephalitis or meningitis. About 1 in 10 cases of these diseases result in death.

This is the mosquito that notoriously carries the parasites that cause malaria. In first world countries malaria has been eradicated, but the presence of these mosquitoes along with growing globalization means that the risk of reintroduction is always present. The Anopheles quadrimaculatus is found throughout the Eastern United States.

These mosquitoes are usually active during twilight hours in the morning and evening, and sometimes at night. They feed on humans and other mammals. They are also common in rice growing areas, where they lay their eggs in the freshwater rice paddies.

Mosquito prevention for all three types of mosquitoes is similar. Because all of these mosquitoes lay their eggs in standing water, the eradication of standing water is key. Mosquito larvae live submerged in water. Pupal mosquitoes also need to be in or near water.

The best way to break the life cycle and reproduction of mosquitoes is to remove the water that is vital to the egg, larval, and pupal stages. In addition, cutting back trees, brush, and tall grass can help reduce habitat for adult mosquitoes. This is particularly true for Aedes mosquitoes.

A quick look around your yard will give you an idea of where mosquitoes might lay their eggs. The key thing is that water is still. Puddles that last more than three days can act as hosts for mosquito eggs. Make sure you check around drains and downspouts for pooling water. Common items in your yard, such as furniture and play structures, can also collect standing water. One notorious source of standing water is fallen leaves. Each individual leaf can hold enough water for a mosquito to lay its eggs. For this reason, it is important to keep leaves raked and dispose of the raked leaves promptly.

In addition to cutting off the life cycle and habitat for mosquitoes, insecticides can help eradicate a mosquito population. Mr. Mister Mosquito Control offers two unique ways of creating a mosquito free zone around your home. If you want your yard or property to be truly mosquito free, there is no substitute for professional mosquito control.

The first method used by Mr. Mister is regular application of insecticide in a sprayed mist. The mist is sprayed on the foliage around your yard, where it sticks and remains for about three weeks. The insecticide kills adult mosquitoes and inhibits reproduction. The insecticide is non-toxic and safe to humans and pets. It is also 100% biodegradable. After 21 days, a Mr. Mister mosquito control specialist will return to your property for another application. The mosquito control specialists will return to spray every 21 days throughout mosquito season.

The other option for mosquito control is an automated misting system. This eliminates the need for repeated visits. Instead of having a mosquito control specialist come to your home every 21 days, the automated system works on its own. It releases a mist of insecticide on a regular basis. This is usually done in the early morning or late evening, when mosquitoes are most active and other insects are not.

If you’re ready for a yard that is truly mosquito free, it’s time to contact Mr. Mister Mosquito Control. We will get rid of your mosquitoes and keep them gone. You will be able to enjoy your yard all spring, summer, and fall. Just take a look at what our many satisfied customers are saying. Then contact us online or give us a call at (404) 941-0720.