At first, getting rid of mosquitoes seems like a dream come true. No more itchy bites. No more swarms around your backyard, favorite hiking spots, or picnic areas. But there is also a much more serious effect. Eradicating mosquitoes would save hundreds of thousands of lives, including tens of thousands of children. Every year, around 700 million people are infected with mosquito-borne diseases. If we eradicate all mosquitoes that number could potentially drop to zero. But is it a good idea? What would happen if we eradicated all mosquitoes? 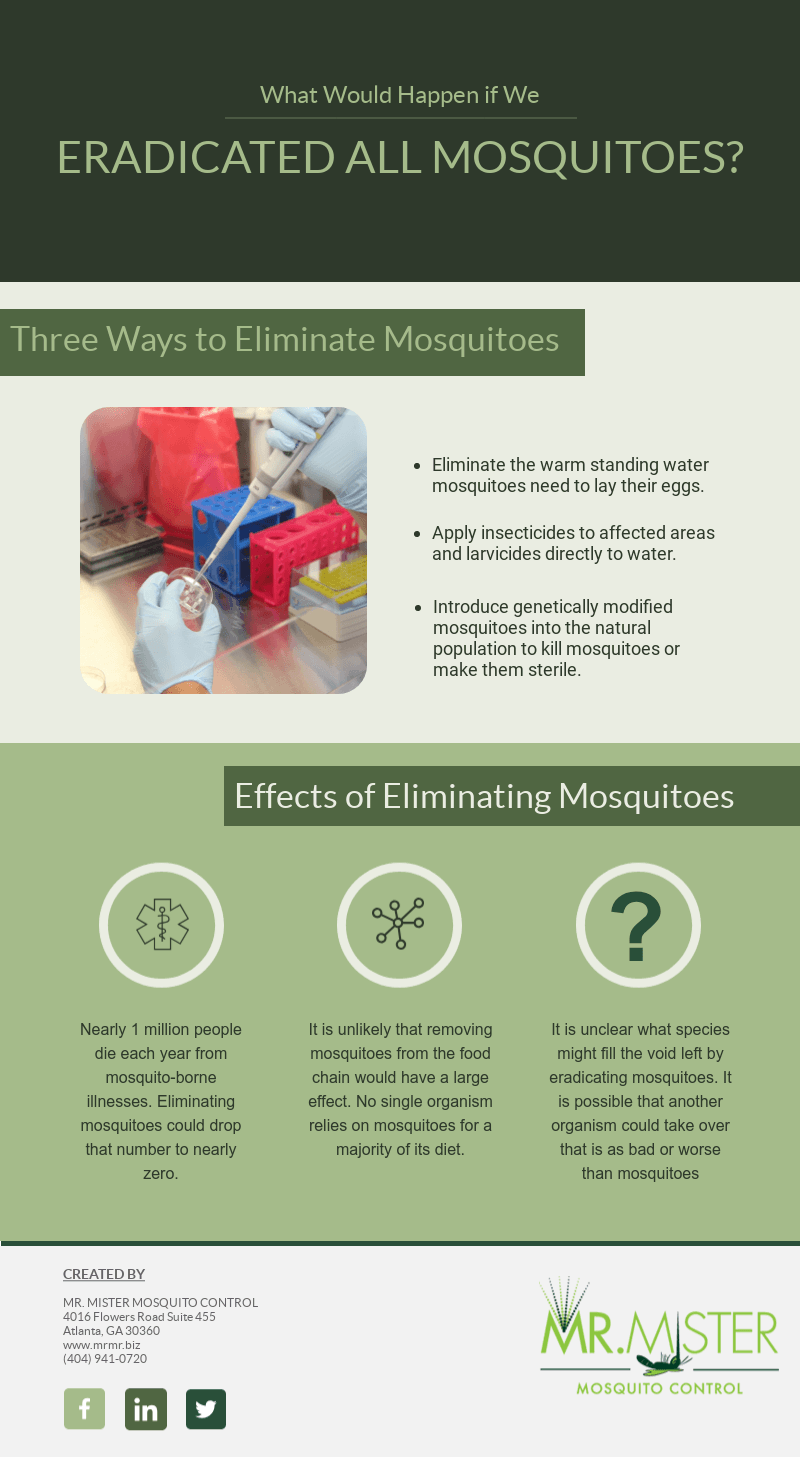 Can You Eradicate Mosquitoes?

Before we can consider the potential benefits or damage from wiping mosquitoes off the face of the planet, we should consider if it is even possible. In short, the answer is a very tentative maybe. Right now there are three ways of getting rid of mosquitoes in a local area. Two of these approaches are relatively low-tech. The third option is decidedly high-tech and verges on science-fiction.

The first way to get rid of mosquitoes in a local area is to eliminate their breeding grounds. Mosquitoes require warm, standing water to lay their eggs and for their larvae to grow. So eliminating mosquitoes often starts with eliminating standing water. There are literally thousands of spots that could hold enough water for mosquitoes to lay their eggs. Very little water is required, about enough to fill a soda bottle cap. With that being the case, it is nearly impossible to completely destroy mosquito breeding grounds. However, reducing standing water is still an effective way of weakening and reducing local mosquito populations.

The second way of eliminating mosquitoes from a local area is with insecticides. There are a wide variety of insecticides used to control mosquito populations. The most popular insecticides are usually some form of Permethrin – one of a group of chemicals called pyrethroids. Permethrin is usually mixed with water or oil and sprayed on vegetation or other areas mosquitoes might breed. It kills mosquitoes by disruptive their central nervous system. Another popular mosquito insecticide is Malathion – an organophosphate that also acts on the central nervous system. There are also types of insecticides called larvicides that are applied directly to standing water to prevent mosquito larva from growing there.

Spraying for mosquitoes is only partially effective. The sprayed insecticides break down relatively quickly, especially with rain. The best may last three or four weeks before a new application is required. The other problem with insecticides is that mosquitoes can develop resistance to an insecticide. In some areas, there are already insecticide-resistant mosquitoes. This makes spraying a good solution, but not a complete solution.

The low-tech options for mosquito control can be effective to an extent, but will rarely result in mosquito elimination over a large area. But scientists have been working on hi-tech alternatives that can be nearly 100% effective in a region as large as a town. It may sound like science fiction, but scientists have developed a variety of genetically modified mosquitoes that can infiltrate a natural population and make it sterile in just a few generations.

One method that has actually been used it to create mosquitoes with a lethal mutation. The mosquitoes are bred in a lab in water that contains a chemical that inactivates the mutation. But when the mosquitoes are released into the wild, they mate and produce offspring that die of the mutation before they can mate and create a next generation. In field tests, this has resulted in a 90% percent reduction in mosquitoes over a large area. Significantly, those numbers tend to hold from season to season, so that the next mosquito season sees similarly low numbers of new mosquitoes.

One mechanism scientists are using to create mutant mosquitoes is to use a genetic editing tool called CRISPR. This editing tool makes it possible to quickly target and edit any part of an organism’s DNA and replace it with custom DNA created in a lab. This isn’t just applicable to mosquitoes. CRISPR can be used and has been used in a wide variety of organisms. There is even hope that is could be used in humans to cure genetic disorders like muscular dystrophy.

Using the CRISPR mechanism, scientists have inserted a gene into mosquitoes that is replicated in both the sperm and the egg of mosquitoes. It renders the female sterile, but not the males. This allows the males to continue to spread the genetic code. When a mutant male mates with a natural female, the female lays a batch of eggs in which all the females are sterile, but the males are not. The females will die without reproducing, but the males will go on to spread the gene to more natural females. Very soon, nearly all the females are laying eggs with sterile females, and once that happens, the propagation of mosquitoes grinds to a halt as there is no next generation.

Is It a Good Idea?

With this method of genetic mutation and eventual eradication, the idea of total annihilation seems like a possibility. But it’s not that simple. This method tends to work in a limited area, where a population can spread the mutation and eventually die off. It would take quite an effort to apply this method globally (though it is hoped that it can be done in places with high rates of mosquito-borne illnesses). The other issue is that this can only be done in one species at a time. For each new species, scientists would have to create mutant males to breed into that population and kill it off. There are about 3,500 species of mosquito on the planet, though only about 100 species carry diseases that affect humans.

So it is unlikely that all mosquitoes on the planet could be wiped out, but what about wiping out mosquitoes in a region? The first effect would be the saving of hundreds of thousands of lives, including many children. Mosquito-borne illnesses kill nearly 1 million people each year. Eradicating the mosquitoes that carry those diseases seems like a massive win for public health globally. But there are always unintended consequences.

The Role of Mosquitoes in the Ecosystem

As far as the role of mosquitoes in the ecosystem, most scientists seem to think that mosquitoes only play a minor role. There is no single organism that feeds exclusively on mosquitoes. While many animals consume mosquitoes, it is only a very small part of their diets. So removing mosquitoes from the food chain would have little effect. But there is another, more worrying effect of wiping out mosquitoes.

Mosquitoes fill a niche in the ecosystem not only as food but as competition. Any time you remove an organism from an ecosystem, it creates opportunities for other organisms. IN the case of mosquitoes, we don’t know what would replace a decimated mosquito population. Could the new population be worse than the mosquitoes they replace? The answer is that we just don’t know. So while it may seem like a great idea to eradicate mosquitoes, at least in one area, it is still unclear what the final results may be. So while eradicating at least some mosquito populations holds great promise for global health outcomes, some scientists are suggesting that we move slowly and with great caution.

What we do know, however, is that eradicating mosquitoes in an area the size of a residential or even commercial property is both feasible and unlikely to cause harm. If you’re ready to live mosquito-free in your home or business, contact Mr. Mister today for a free quote. While we may not be prepared to wipe them off the face of the planet, it’s definitely possible to make your own home a mosquito-free zone!