Global warming and mosquitoes are two significant threats to health in the Southeast. As the earth’s temperature rises, the mosquito population continues to increase, along with the dangerous diseases they spread. There is not much we can do about this in the short term. For now, you can minimize the problem for you and your family if you follow the proper systems until proper mitigation strategies are implemented in the future.

The Scientific American magazine highlighted this issue back in September 2013, and nothing has changed to indicate that the problem will not continue. It will take a long time before any country reduces CO2 emissions sufficiently to slow down global warming. The international community has tried to set goals on emissions, though they have been largely unsuccessful. The hope is to slow warming to 1.5 degrees Celsius or 34.7 degrees Fahrenheit above pre-industrial levels, but as seen from many countries’ lack of commitment toward Cop26 and the Paris Agreement, many scientists are not so optimistic. Even if all countries do follow the commitment to decrease global temperatures, currently our trend is leading to be only 1.8 to 2.4 degrees Celsius or 35.24 to 36.32 degrees Fahrenheit above pre-industrial temperatures. Unfortunately, even that increase is enough to send the planet into a new era of altered climate and all the damage that comes with it.

Based on the number of countries involved and the complexity of reducing emissions, experts believe that the best-case scenario is closer to 2.7 to 3 degrees Celsius or 36.86 to 37.4 degrees Fahrenheit above pre-industrial levels, which, again, will cause huge ecological and social impacts.

Should you Be Concerned? 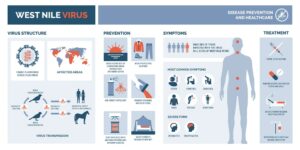 Global temperatures and mosquito populations rise together. Most mosquito species become active at 50 degrees. If global warming continues, we will reach that temperature much earlier in the year than we do now. Mosquito-friendly habitats will increase, and infection rates of dengue fever, West Nile virus, Malaria, Chikungunya, and Encephalitis will increase with them. The most common mosquito-caused viruses are the Eastern Equine encephalitis virus, LaCrosse virus, and the West Nile virus. While drought is a serious concern in many areas, not all temperature increases lead to arid conditions. They can also lead to warm, humid areas around rivers, streams, creeks, and lakes. And Atlanta is full of water sources that are a haven for mosquitoes.

Statistics show that the incidences of mosquito-borne diseases have significantly increased in the past decade. Already, as of July 12, 2022, the Fulton County Board of Health (FCBOH) identified mosquitos with the West Nile disease near Brown Middle School. The rainy yet warm weather in Atlanta supplies the ideal nesting and mating for mosquitos. FCBOH initiates mitigation measures to reduce and control the mosquito population. The board even acknowledges using Mosquito control businesses. Therefore, when beginning the process of mosquito control, consider your local mosquito control businesses, such as Mr. Mister Mosquito Control.

As the average world temperature increases, even by 1-2 degrees, the mosquito problem will grow with it, making Mr. Mister’s services increasingly important to residents and visitors to our city. Many Atlanta residents living close to rivers and creeks should be planning for an increased mosquito problem.

Global warming and mosquitoes go hand in hand. The warmer the atmosphere, the faster and earlier they will breed. The world is warming each year. You should take steps now to prevent the increase in mosquito populations from attacking you and your family. It will also reduce the likelihood of your family or pets contracting potentially fatal diseases. The Mr. Mister mosquito service can help you eliminate mosquitoes and prevent infestation and disease. 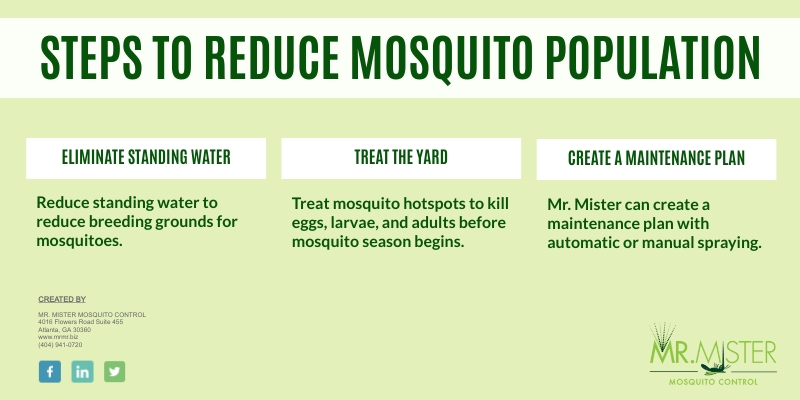 In 2018, mosquitos caused 830,000 fatalities nationally due to different diseases spread from the bites. Internationally, mosquitos cause one million deaths annually. Therefore, obtaining the title of the deadliest creature in the world. Of people infected with the West Nile virus, 1 in 5 show symptoms, and 1 in 150 become seriously ill, which may lead to death. Symptoms of the West Nile virus include headaches, body aches, joint pain, vomiting, diarrhea, a skin rash, and fatigue, among others. More serious side effects are numbness, tremors, seizures, loss of vision, and going into a coma, among many other side effects.

Symptoms of other mosquito-spread diseases include:

There are some necessary steps you can take to reduce the chances of being bitten. If you install fine-mesh screens on all doors and windows, you can reduce the chances of mosquitoes entering your home. You can also use insect repellent. Keep in mind that there are effective repellents and insecticides that don’t contain DEET, which is not as safe for children and pets as some alternatives.

Mr. Mister offers treatments that are safe for you, your family, and your pets. The first step is having your yard or garden surveyed by our technicians. We identify and remove or treat any infestation, especially in areas with standing water. These include pools, ponds, metal or plastic containers lying around your yard, or anywhere else that could hold water without drainage.

Even drains, culverts, gutters, and downspouts can be home to overwintering mosquitoes or their eggs.

One bottle cap filled with stagnant water can breed dozens of eggs, so simply tossing out the excess water in the cap can greatly decrease the mosquito population. The same goes for water bottles, stagnant rainwater in tires, and garden pools. If already dozens of eggs can be laid in just a water cap, imagine how many larvae can be produced in a tire!

Eggs of some mosquito species can survive over winter, so treating them before they hatch is critical. Mr. Mister also sprays the underside of the foliage around your home to ensure that none of the overwintering mosquitoes survive.

Global warming means that eggs will hatch and mature into adults earlier than expected. It is important to recognize this effect and plan accordingly. Mr. Mister mosquito control can help you with your mosquito control planning. After the initial treatment—removing any existing infestation of eggs, larvae, and adults—you are ready to take another step forward toward mosquito elimination.

Mosquitos are not the only consequence of Climate Change and Global Warming. In 2016 the Environmental Protection Agency (EPA) warned about the increase in rainfall and temperatures. The Environmental Protection Agency also warned that this will lead to extensive flooding and storms. Georgia’s sea levels have risen approximately 11 inches since 1950. Even though this does not seem very significant, the last ten years have seen a significant change. Now, sea levels rise an inch every two years, which can lead to catastrophic changes if these issues are not addressed quickly. 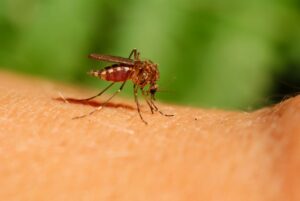 Between 2010 and 2014, at least 17 power outages occurred in Georgia due to climate and weather-related events. In September 2010, 99 percent of Georgia’s population was impacted by weather-related disasters which were affirmed by the federal government.

The last 8 years were designated the warmest years in history with 2020 being classified as the hottest year recorded in history. 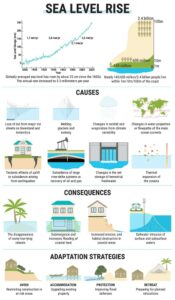 Since 2000, tidal floods have increased by 100% in certain locations of Georgia due to sea level rise. Increased sea levels not only worsen and make more frequent tidal and flash floods, but strengthen and increase the frequency of hurricanes to cause even more damage. The continual damages affect Georgia’s residents, as well as have economic and social impacts. A myriad of historical landmarks and buildings are threatened by the rising sea levels and increase in storms and floods.

As temperatures rise, fatalities, infrastructure, and agricultural loss will increase due to storm and weather-related damages.

How Can You Help?

The Georgia community can work to restore Georgia’s natural coastal ecosystem. Protecting wetlands, such as marshes and bogs, is a natural mitigation strategy to reduce sea level rise and storm runoff. The community can work with government officials to protect the wetlands and can volunteer to grow a buffer of greenery by growing and planting the native plants of Georgia. This will not only help with sea level rise but can be useful in protecting buildings from storm runoff and floods.

Education is also key. Informing children and young adults about the dangers of sea level rise due to Climate Change, as well as Climate Change in general, is essential to initiate action and reduce humanity’s impacts on Climate Change. The actions of the next generation are crucial in the prevention and decrease of Climate Change and Global Warming.

Mosquitos: Things to Consider Moving Forward to Keep Your Property, Yourself, and Loved Ones Safe

There are many simple steps you can take to prevent the growth and invasion of mosquitos on your property. First, you can keep your yard clean. Clean out your yard, specifically areas with still water, twice a week to get rid of breeding grounds for mosquitos. Such areas are gutters, bird baths, and trash cans. Second, keep a fan running inside and outside your residence. Fans will repel mosquitos since they cannot fly well. Third, do not overwater your lawns. Not solely because overwatering will kill your plants, but because overwatering can lead to stagnant water. Therefore, becoming a breeding ground for mosquitoes. In Georgia, 1 inch of water a week is enough to keep a lawn healthy. Lastly, find your local mosquito prevention experts, such as Mr. Mister mosquito patrol to ensure continuous protection against mosquitoes.

Mr. Mister mosquito control also supplies In2Care Mosquito Control traps. These traps pose no threat to important pollinators, such as bees. The traps simply disperse a United States Department of Agriculture (USDA) approved fungus to kill off the mosquitos within a few days after contact. The traps are biologically friendly and do not negatively affect the surrounding environment.

Many corporate and large mosquito control companies have a more limited selection of mosquito mitigation and elimination measures. Hence, finding a reliable and local mosquito company, such as Mr. Mister mosquito control can prove a healthier, more ecologically-friendly, and more viable option for the building’s residents, pets, and the surrounding ecosystem.

Getting Started With a Comprehensive Mosquito Protection Plan

Initiating a comprehensive mosquito plan is the first step in getting rid of and preventing further mosquitoes on your property. Mr. Mister can supply you with a sufficient protection plan against mosquitos to keep your property safe.

Mr. Mister’s automatic mosquito spray system creates a barrier between your property and any mosquitoes trying to enter and invade your property. It operates with a series of spray nozzles, fed by pipes carrying a powerful insecticide spray. This system has two benefits.

So, contact and collaborate with your local mosquito control company, Mr. Mister, to initiate a mosquito protection plan today!