When most people think about getting rid of mosquitoes, it’s because they don’t like their bites. Mosquito bites can be an itchy nuisance. If you’re the kind of person who tends to get a lot of bites (yes, it varies by person), just a short time outside can leave you with a dozen bites or more.

Children tend to get bitten worse than adults or at least react to the bites more strongly. A mosquito bite is almost synonymous with a small, annoying nuisance. But recent news scares about mosquito-borne diseases like the Zika virus highlight another concerning truth. Mosquito bites are more than a nuisance. They can spread serious diseases. So, just how dangerous are mosquitoes? 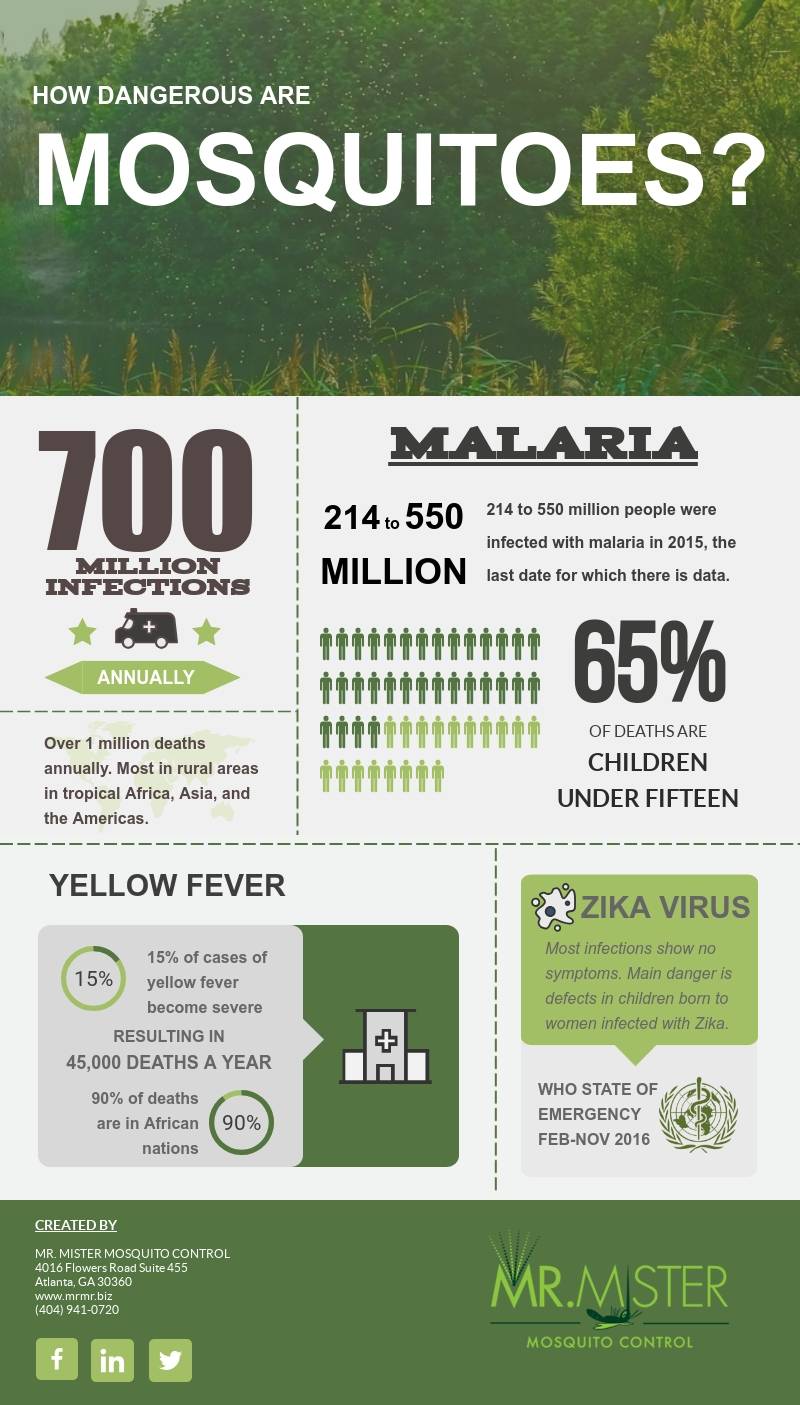 Mosquitoes carry diseases by spreading bacteria, viruses, and parasites that cause disease in humans and animals. The mosquitoes can spread these diseases without being infected themselves. Common diseases spread by mosquitoes include malaria, yellow fever, dengue fever, Zika fever, chikungunya, elephantiasis, and West Nile virus.

The single most deadly disease carried by mosquitoes is malaria. Malaria is caused by a single-celled parasite that is carried by the Anopheles mosquito. The disease is spread when an infected female mosquito bites a human. The parasite is present in her saliva and travels into the human’s bloodstream. The parasite makes its way to the liver, where it matures. The mature parasite then spreads to the rest of the body through the bloodstream. When a mosquito bites an infected human, the parasites can spread to the mosquito. The infected mosquito then carries the parasite to other humans, continuing the cycle of infection and disease.

It is estimated that in 2015 anywhere from 214 to 550 million individuals were infected with malaria. Of those infections, nearly a half million resulted in death. The majority of cases of malaria (about 65%) occur in children under 15 years old.

Malaria remains the most common cause of premature death in children globally. However, significant progress has been made in reducing both infections and deaths. Between 2000 and 2015, the World Health Organization and UNICEF estimate that deaths attributable to malaria dropped by 60%.

The significant drop in deaths from malaria is due to a variety of factors. Mosquito control tops that list. Efforts at malaria control in areas most affected by the disease have reduced infections. The widespread use of ITNs, insecticide-treated nets, has reduced the number of infections. Even mosquito repellent can help reduce infection rates. In those who are infected, the use of artemisinin-based combination therapies has also reduced the number of deaths.

Outside of tropical and third-world areas, malaria has largely been eradicated. In the United States, malaria was mostly eradicated by the early 20th century. A concerted government effort eradicated malaria through a combination of methods. DDT was used to control mosquito populations, reducing the number of mosquitoes available to carry the disease.

At the same time, advances were made in the treatment of malaria, reducing the number of humans who could infect mosquitoes with the parasites. In some areas, swamps and wetlands that served as natural breeding grounds for mosquitoes were drained, often for agricultural use. These combined efforts significantly reduced the number of infections in the United States. In the 1950s, there was a final push to eradicate malaria in the American South. Today, malaria is not a concern in the United States. However, it is still found in the United States in people who contracted the disease elsewhere and brought it back with them.

The most common mosquito-borne illness in the United States is West Nile virus. The virus was introduced to the United States via Queens, New York, in 1999. By 2005 it had spread to every state but Alaska, Hawaii, and Maine. The disease is spread mostly among birds but can be carried from birds to mammals, including humans, by mosquitoes. It is hard to get accurate figures on the number of infections because most infections have such mild symptoms that they go unnoticed. In very rare cases, the disease can lead to severe illness and death.

In the early years of West Nile virus, its spread was closely monitored by mostly local governments. Local governments tested dead birds for the virus, and there was significant concern over its spread via mosquitoes. Today, scientists have documented West Nile virus throughout the United States, so most governments have stopped testing for it. It is also known that West Nile is almost entirely harmless to humans. For this reason, many of the earlier concerns with mosquito control have been scaled back. 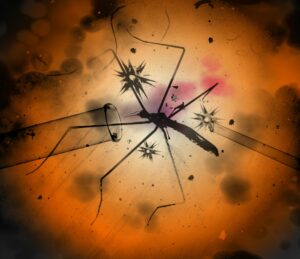 How dangerous are mosquitoes? Very!

One of the most famous and most feared outbreaks of mosquito-borne illness took place in 2015 and 2016 when the Zika virus began to spread in parts of South and Central America. By February 2016, the World Health Organization had declared Zika a Public Health Emergency of International Concern. The WHO lifted the emergency in November 2016.

Zika is hard to diagnose because its symptoms are very similar to many other diseases, including dengue fever and yellow fever. In most cases, there are no symptoms or very mild symptoms. The primary concern with Zika came from abnormalities present in babies whose mothers were infected during pregnancy. For this reason, the CDC advises women who are pregnant or considering becoming pregnant to avoid traveling in areas where Zika is active. Zika can also be sexually transmitted, so men who have traveled in areas where Zika is active are advised to use condoms during sex or abstain from sex entirely for six months, even without symptoms.

The Zika virus caused an uproar internationally and resulted in significant actions by health organizations. However, in terms of actual deaths or other serious issues, it was relatively benign compared to malaria and other mosquito-borne illnesses.

Mosquitoes remain one of the world’s deadliest animals due to the diseases they carry. While malaria is responsible for the largest portion of these deaths, other mosquito-borne diseases can cause severe illness or disfigurement, even if they don’t always result in death. Yellow fever and dengue fever can cause a brief severe illness that usually subsides within a week. But in about 15% of cases, the illness can return with severe side effects. It still causes about 45,000 deaths each year. 90% of those are in African nations.

Elephantiasis is the result of infections with parasitic filarial worms. Mosquitoes carry the parasite, and infection is a result of a bite from an infected mosquito. While most infections show little or no symptoms, in some cases, the infection can cause elephantiasis. Elephantiasis is a disorder in which a part of the body, usually the legs, arms, breasts, or genitals, become severely swollen. Most cases occur in tropical regions of Africa and Southeast Asia. Although the disease is rarely fatal, it can be painful and often results in loss of economic and social status.

Throughout the world, the most effective form of control for mosquito-borne illness is the prevention of mosquito bites.  If you can prevent mosquito bites, you don’t have to worry about the pathogens they may carry! So while mosquitoes transmit disease, if you can reduce the likelihood of getting bit, you can prevent a lot of suffering.

In the United States, severe mosquito-borne illnesses remain rare. This is largely due to the swift treatment of diseases, which prevents further spreading. It is also due to the location of the United States in a mostly temperate region, which places it outside of the hardest-hit areas of the planet. However, mosquito-borne illness prevention is still important. Here in the Southeast, we have lots of mosquitoes, so safety is a concern. However, fewer mosquitoes mean less concern.

The best way to prevent mosquito-borne illnesses is to remove mosquitoes. This can be done with regular spraying. If you are ready to create a mosquito-free zone around your home, call or contact Mr. Mister today. We offer a few different options to clear your home and property of mosquitoes. We’re always happy to prepare a quote and get you started today!