Mosquitoes are annoying. We all know that they are a common nuisance in houses, parks, yards, and open spaces. But they are capable of giving you more than just a painful bite; they also transmit deadly diseases. Thousands of remedies have been put to use to get rid of them, but only a few actually work. Many of them are harmful to you and the environment, while others are safer but only provide temporary relief. So what is the solution for a mosquito repellent that actually works? We’ll get to that, but here’s a hint: The best way to avoid mosquito bites may not be a repellent at all.

With the advancement of science and medicine, experts have been able to crack the code of lasting, effective, and safe solutions for mosquito control. But repellents are only one part of the answer. If you want to clear an area of mosquitoes, other mosquito control techniques may be more effective. Mr. Mister is an pest control company that promises you a mosquito-free yard. Unlike repellents, which only keep mosquitoes off your body for a few hours, we guarantee 100% effective mosquito control for the entire mosquito season. 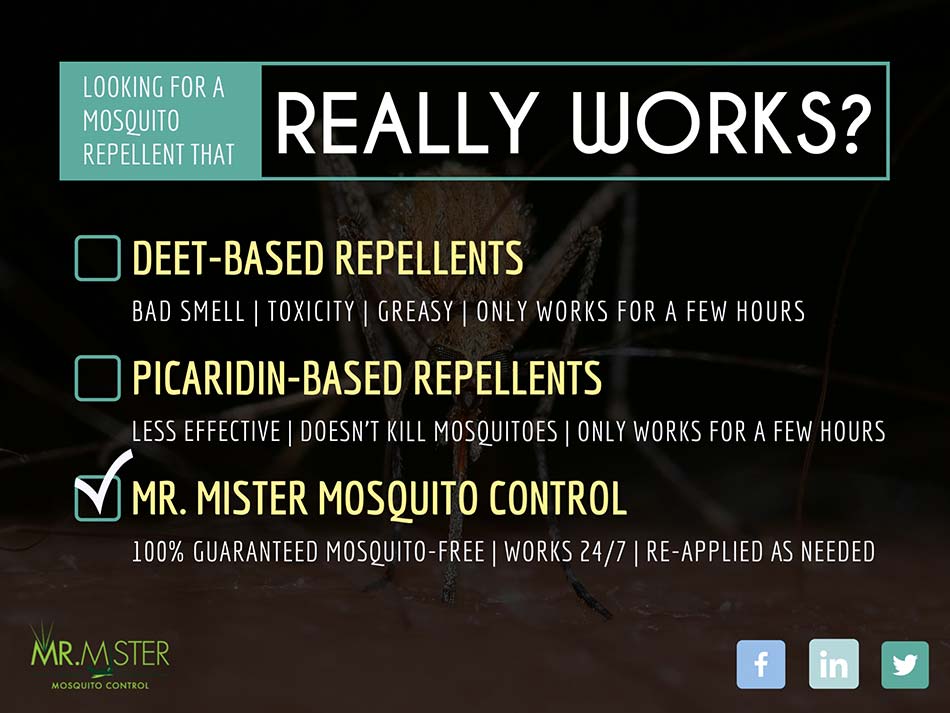 With thousands of species discovered so far, mosquitoes are one of the most diverse groups of insects. You might think of them as just an annoyance, but they carry germs and parasites that make them the single most deadly animal on the planet. Many mosquito-borne diseases have been eradicated in the US. Even so, hundreds of cases of mosquito-transmitted diseases have been recorded to date, and the number is increasing with time.

Urban areas with well-planned drainage systems are slightly better off than those with poorly maintained conditions, but the threat remains. Regions that are hot and humid and receive plenty of rainfall—like the Southeast—are also at higher risk for mosquito activity. Warm, moist weather and standing water from regular rain showers serve as a favorable habitat for mosquito dwelling and breeding. Because of this, a mosquito repellent that actually works in these areas needs to be super-tough on mosquitoes but harmless to you and your loved ones.

At one point or another, most people have tried a variety of repellents and home remedies to keep their homes and yards free from mosquitoes. Traps, sprays, mats, coils, and lotions are common ways to keep mosquitoes away from you, your house, and your yard. Every insect repellent has its pros and cons; usually, the cons outnumber the pros. These repellents might work for a little while, but they fail to provide you with a permanent solution for mosquito control. Besides, they are loaded with harmful chemicals that can do more damage than good.

The most common ingredient in a mosquito repellent that actually works is DEET. The CDC, WHO, and many other experts all agree that DEET is highly effective—at least for a few hours after application. And DEET has been around since the 1950s, so we have a lot of data about its effectiveness and side-effects. Unfortunately, regular use of repellents with DEET has resulted in some reports of neurotoxicity. Even if you don’t use it often enough to suffer cognitive effects, even one-time use has its downsides. DEET can feel greasy and has a pungent, unpleasant odor, and it can damage some synthetic materials. Most consumer-strength DEET-based repellents use a relatively low concentration of DEET. Still, it is not recommended to use multiple applications in a day or to use DEET too regularly.

Picaridin is a relative newcomer to the repellent market, though it has been in use in Europe for nearly three decades. Picaridin is the most highly-recommended DEET alternative. Both the CDC and the WHO endorse the use of Picaridin-based repellents. Unlike DEET, Picaridin doesn’t have a greasy feel or noxious odor. It is also safe on most materials and seems to have lower toxicity. However, Picaridin is only effective for a few hours before it needs to be reapplied.

How Does Mr. Mister Help?

The first option is an automatic system that is managed by a network of small nozzles. These nozzles project a fine mist that is sprayed onto the targeted area, whether it’s your yard, lawn, or other open spaces. Once sprayed, the system works in two ways. First, it kills the mosquitoes that are already present in your property. Secondly, it maintains a protective layer that guards your property against new mosquitoes that are likely to attack. The system is scheduled to spray when mosquitoes are more active, i.e., dawn and evening. This way, your house and yard become insect-free zones, and you can enjoy your time outside without worrying about mosquitoes and insects.

The second system is similar to the first but does not require installation of any sort. Instead, Mr. Mister technicians visit your home about every 21 days to apply the same insecticide solution, which remains in place for at least the next three weeks.

Mr. Mister’s automatic mosquito control solution is 100% safe and biodegradable, which means it has zero damaging effects on your family’s health and environment.