There is often somebody in a crowd of people who is bitten first while everybody around them seems to be immune—at least for a while. One person is scratching a maddeningly itchy red welt. Meanwhile, everybody else is enjoying their burgers and barbecued chicken. Why is this? Why makes one person the target, the mosquito magnet, while everybody else is having a great time?

Are There Really Mosquito Magnets?

First, an important question! Are there genuinely mosquito magnets, people that mosquitoes seem to prefer? Scientists have done a great deal of research on this subject. The results of their studies seem to indicate that, yes, there are people who are mosquito magnets. Some people give off a chemical signal that attracts mosquitoes like cattle attract flies.

Around 10% of people are more attractive to mosquitoes than the other 90%. Some researchers believe this has to do with the quality of blood that female mosquitoes need to create healthy eggs. (Only females bite. They need the blood to get the protein to develop their eggs. Males feed on nectar and never suck blood.) Others believe it is more likely to do with mosquito attractants that enable these insects to home in on their prey. 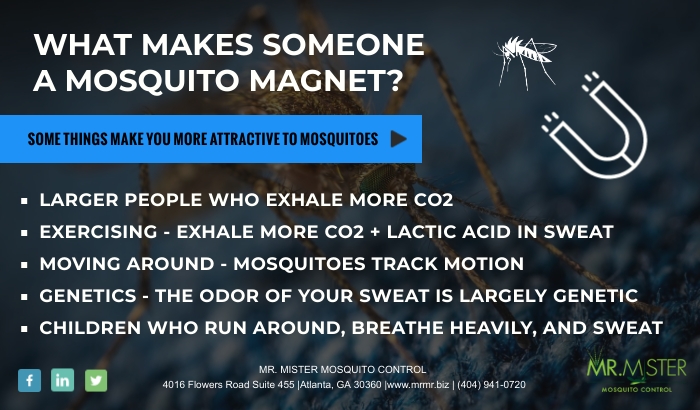 Who Mosquitoes Bite Most

Genetic make-up seems to have a strong influence on who mosquitoes bite most. In fact, scientists have discovered that 85% of your susceptibility to being bitten by mosquitoes is related to genetics. It mostly comes down to your body’s chemistry. Certain chemicals on your skin’s surface attract mosquitoes like bees to nectar. Since much of this is genetic, around 85% of a person’s susceptibility to mosquito bites is genetic.

Mosquitoes are primarily attracted by carbon dioxide and sweat. But the specific ingredients in your sweat are different for each person. The presence of uric acid, cholesterol, and other steroids on the surface of your skin can turn you into a mosquito magnet. So can the lactic acid that is emitted by your sweat glands when exercising. Mosquitoes can detect these attractants from as far as 50 meters (55 yards).

The larger you are, the more carbon dioxide you emit. Large adults and pregnant women are much more likely to be bitten than smaller people. Another factor is movement. Mosquitoes have poor vision, but they can detect movement. It’s how they can differentiate the silhouette of a potential target from a similarly-sized bush or tree. And when you run around, you sweat more and exhale more CO2 than someone standing still or sunbathing. That extra sweat and CO2 attracts more mosquitoes.

If there is a crowd of people in your yard, the larger and more active people will most likely act as mosquito magnets. However, children also do a lot of running around, which can negate their size advantage. Children are also often more allergic to mosquitoes than adults, resulting in more visible bites. When mosquitoes are buzzing, your best defense is sitting still with as little skin exposed as possible.

Mosquito bites can be dangerous, so it is wise to minimize the chances of attack. Mosquitoes cause more potential problems than just itchiness! West Nile Virus is a killer in the US, and everybody should be aware of the Zika Virus by now. There are many more diseases borne by mosquitoes in the Atlanta area and the Southeast in general. Among these are the Chikungunya and Dengue viruses, both of which cause severe joint pain that can last for years.

Atlanta consistently rates as one of the worst cities in the US for mosquitoes. Or perhaps should we say the best for mosquitoes, but not so good for humans and their pets! It is imperative that residents of Metro Atlanta and Georgia, in general, do all they can to protect themselves. Particular care should be taken by those who appear to be human mosquito magnets and seem to get bitten when most others are not.

While a personal mosquito repellent spray can be effective, the best way to prevent mosquito attacks is to eradicate the mosquitoes! Mr. Mister’s ClearZone™ mosquito spray or our automatic mosquito misting system can provide you with an extremely effective mosquito barrier. Some people are affected by the chemicals used in personal body sprays, and controlling mosquitoes rather than deterring them is always the better solution. Contact Mr. Mister today to find out how you can protect yourself, your family, and your guests from mosquitoes on your property.