It might seem that a simple solution to your mosquito problem would be to simply leave it the birds, the bats, and any other natural predators. Many people even believe that zappers or ultrasonic systems will control mosquitoes. Let’s look at each of these and discuss their potential for taking the place of a professional mosquito control company like Mr. Mister.

Yes, birds and bats eat mosquitoes, just like they eat many other insects. Attracting birds certainly helps to control mosquitoes in your yard. And if you also have a thriving bat population nearby, they’ll eat even more mosquitoes. But mosquito-eaters aren’t restricted to the skies. Fish also eat insects, and if you have a well-stocked fish pond, the fish will tend to eat up as many mosquito larvae as they can find.

But will the birds, bats, and fish get them all?

Fish might eat all the larvae in a small pond. In fact, one suggestion we make for mosquito control is to stock water features with mosquito larvae-eating fish. But that won’t cure your mosquito problem.

Birds can do more, since they aren’t limited to a small pond, but they won’t reduce your mosquito population to zero. Martins, for example, are voracious insect-eaters. They will gobble down mosquitoes, but they aren’t picky. They also eat mosquito-killing insects like dragonflies.

One factor to consider is that insect-eating birds such as martins and swifts are usually active in daylight hours only. That means they will have no effect on mosquitoes that are active at dusk and later into the night. Not only that, but you usually see these birds feeding at the treetop level, not at the lower levels where mosquitoes are more likely to be active.

Bats also eat mosquitoes, but they prefer moths which offer far more nutrition than a mosquito. They will not focus on mosquitoes by choice, only if there is nothing else on the menu. Bats also spread almost as many diseases as mosquitoes, so they should not be relied upon as a natural mosquito control option. 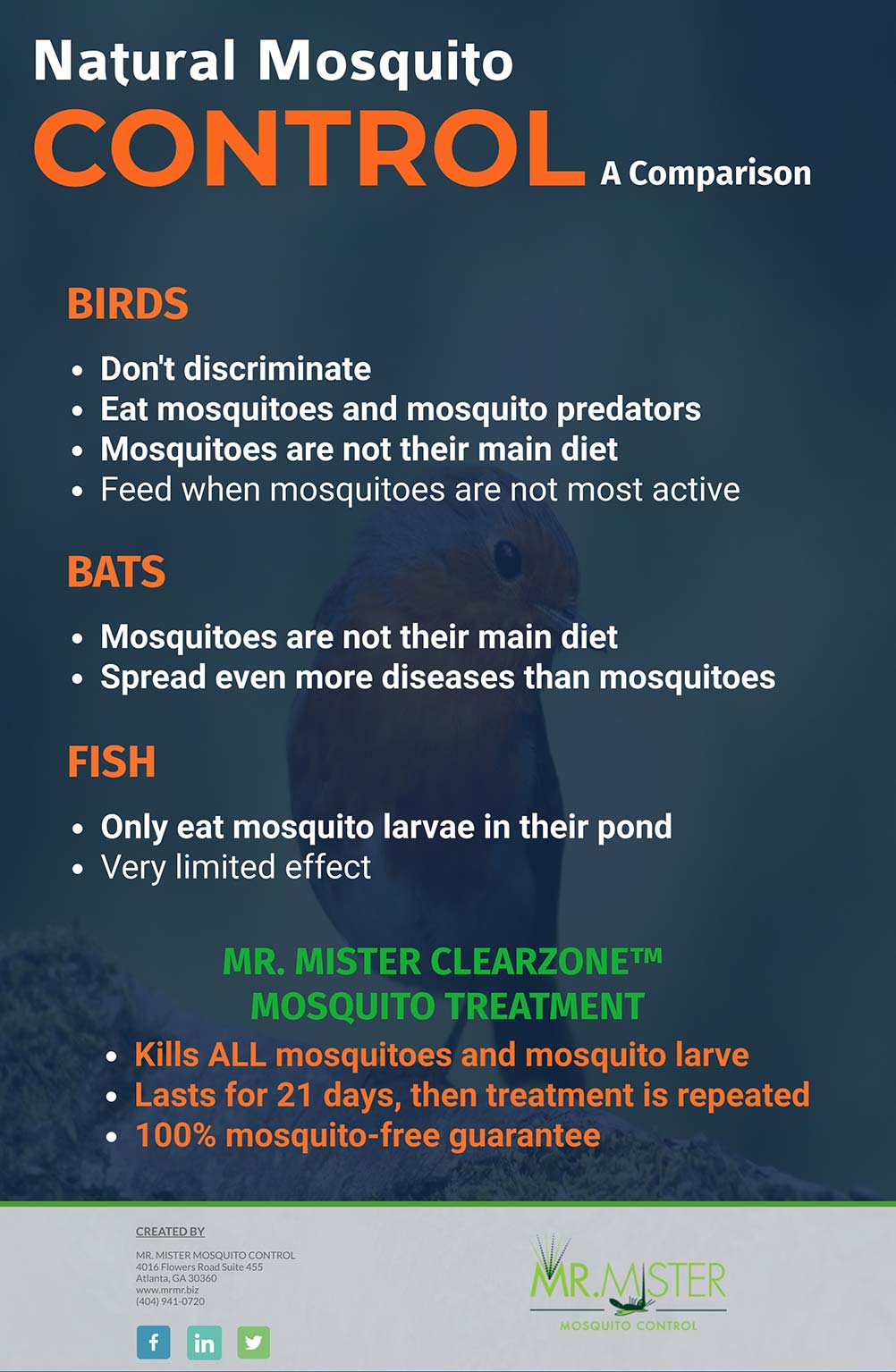 Despite popular belief, ultrasonic devices do not affect mosquito populations. Manufacturers and retailers of ultrasonic devices make some big promises, but they mostly fall flat. Independent studies have shown that not one of these devices has demonstrated effective mosquito control.

The same is true of bug zappers, which fry mosquitoes that are unlucky enough to bump into them. Yes, it is true that they will kill mosquitoes, but they also kill natural predators of mosquitoes and other beneficial insects. More importantly, they have little effect on mosquito populations because mosquitoes are not attracted to light. The mosquitoes killed by a bug zapper were just in the wrong place at the wrong time

Mosquito traps are only slightly more effective. They can trap and kill lots of mosquitoes, leading you to think they are working wonderfully. But they make very little difference to the overall population in your yard.

This is The Answer to Effective Mosquito Extermination

If you need effective mosquito control, contact Mr. Mister. Fill out a no-obligation free survey, and we’ll recommend the best solution for you. Call us at (404) 941-0720 or visit our mosquito map below to find a location near you: