According to USA Today, Atlanta tops the list of US cities with the worst mosquito problems. This is not surprising, as the city is located in a state that typically experiences humid summers and significant rainfall. The current mosquito problem is mostly due to the humid subtropical climate. But as global temperatures increase, scientists expect the mosquito population to grow even more. 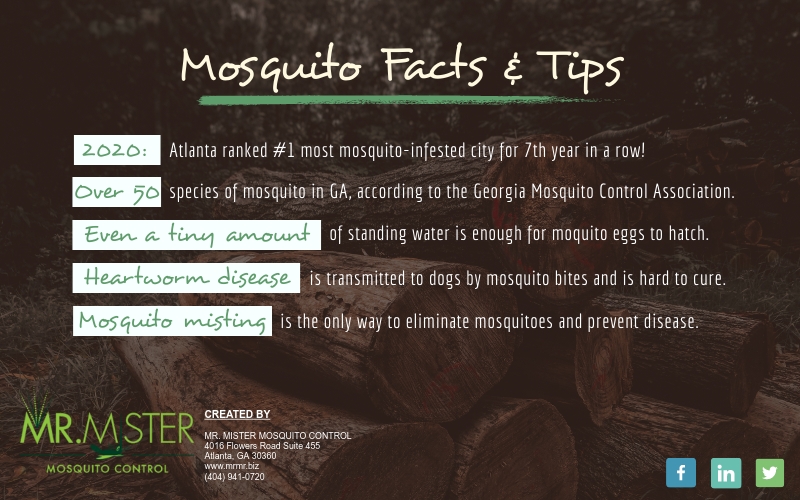 According to the Georgia Mosquito Control Association, the state of Georgia is home to over 50 species of mosquitoes. These include the Anopheles species, which carries and transmits malaria, although malaria is no longer a significant concern in the US. Georgia is also home to the Aedes aegypti, also known as the Asian tiger mosquito or the Yellow fever mosquito, which transmits the deadly arboviral disease Dengue. This species is easily recognizable because of the white markings on its legs. The Yellow Fever mosquito also transmits Chikungunya and is one of the most widely spread species.

These mosquito species thrive in damp, dark places, especially near bodies of water, and mosquitoes only need a very small amount of standing water to lay their eggs. Flower and vegetable pots in your garden, the pond near your home, or even a garbage heap lying nearby are all potential breeding grounds for mosquitoes. Even seemingly harmless objects like a birdbath or a damp wading pool hold enough water to hatch a horde of mosquitoes in just a couple of days. And due to climate change, the time taken for the egg to mature into an adult mosquito is gradually but worryingly decreasing. Many species have adapted to undergo this process in as little as four days.

As temperatures rise, mosquito populations are sure to increase in the coming years and decades. So the logical and immediate action to take is to suppress mosquito growth as much as possible. This includes thoroughly cleaning neighborhoods to reduce potential hatcheries and encouraging the use of mosquito repellents and mosquito misting.

The most effective method to limit the spread of disease is to control and eliminate mosquito populations. Diseases like malaria have claimed over half a million lives in 2019 alone. The World Health Organization has listed indoor residual spraying of insecticide and repellent as a primary method to defeat Malaria.

Mr.Mister’s mosquito control system provides users with a custom automated misting system that sprays around your house and garden at preset times of the day. It ensures that mosquitoes hiding in foliage or under leaves, as well as eggs and larvae, are taken care of.

The Mr. Mister mosquito misting service is also an effective way to treat and eliminate mosquitoes on your property. It doesn’t require any installation and takes effect immediately.

To prevent disease, it is also important to take simple measures at home. Make sure all cracks in doors and windows are sealed, so mosquitoes are not allowed inside the house. Also, do not leave uncovered containers of water around the house. In the case of Chikungunya, sanitation is an equally important measure to prevent the Asian tiger mosquito breeding.

Your Pets and Mosquitoes

Mosquito facts and tips aren’t just for humans. Mosquitoes seek out a variety of hosts, which includes reptiles, birds, and mammals. Dirofilaria immitis, commonly known as heartworm, is a life-threatening disease for canines and occasionally cats. It is caused by a roundworm that can easily be transmitted by a mosquito bite to dogs, cats, raccoons, etc. Treating an infected dog requires severe restriction of exercise and multiple injections that must be administered at a veterinary hospital. There is also some risk of complications when treating dogs with heartworms.

Heartworm disease was once endemic to the East Coast and Deep South regions of the US, up until the 1960s. Today, however, there are reports of cases in all fifty states. So it is increasingly important to use a mosquito treatment method that reduces the risk of bites to your pets. It is also economical since the only way to control the infection in canines is to invest in expensive injections and pills. Only installing a reliable mosquito misting system or spraying regularly can end the threat of such diseases occurring in the first place.

Summary of Mosquito Facts and Tips

We cannot stress enough how important it is to protect yourself and your family from mosquito-borne diseases, and it is always better to prevent than to cure. A fully biodegradable solution from Mr. Mister can help solve mosquito problems without damaging the environment or triggering allergic reactions.