Mr. Mister takes mosquito control safety very seriously. Our mosquito misting system is very effective at eradicating mosquitoes and other biting insects from your backyard, garden, or commercial premises. We are very aware of the potential effect of insecticides on humans and animals, particularly concerning child safety. We can state with confidence that, when used properly, the mosquito control systems we use are safe for babies, toddlers, and older children. 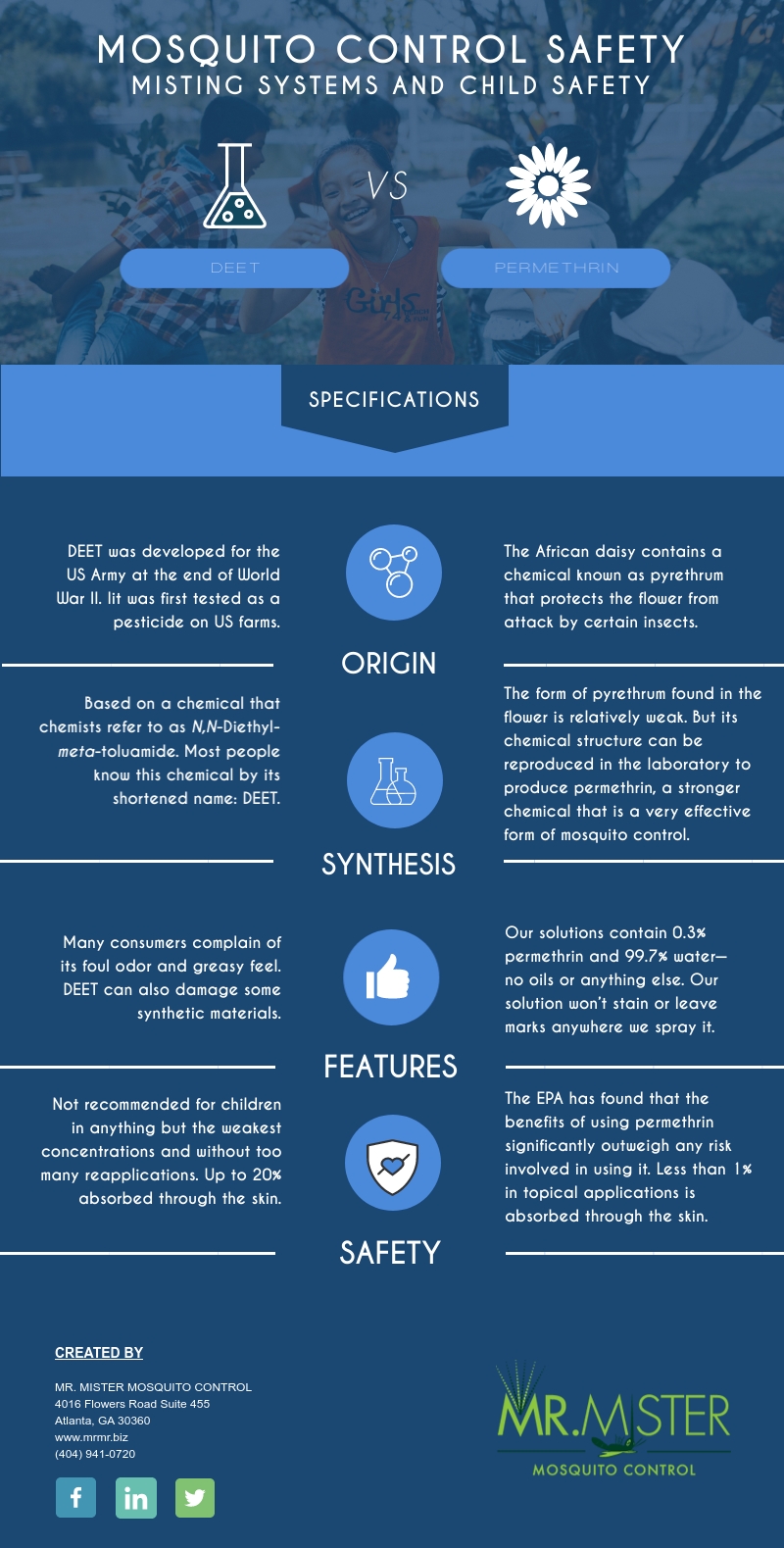 A major factor in mosquito control safety is our choice of insecticides. Many insecticides can be used to destroy mosquitoes. Every single one of them is based upon a chemical that is poisonous to mosquitoes. That only makes sense! But what is deadly to mosquitoes may be more or less toxic to humans and their pets. There are a few commonly used insecticides, and they are not all created equal.

One of the most common types of insecticide is based upon a chemical that chemists refer to as N,N-Diethyl-meta-toluamide. Most people know this chemical by its shortened name: DEET.

DEET was developed for the US Army at the end of World War II. Its inventor, Samuel Gertler, actually worked for the USDA, not the military, and it was first tested as a pesticide on US farms. But the need for an effective insecticide grew out of the harrowing experience of soldiers fighting in the jungles of the South Pacific in World War II. By the end of the war 1946, it was in use by the military, and in 1957 it was approved for civilian use. Many Americans became familiar with the new insecticide during the Vietnam War when it was used extensively to protect troops fighting in the jungles of Vietnam.

DEET Is Common but Dangerous

For a long time, DEET was the go-to insecticide to prevent mosquito bites. But DEET is a heavy-hitting chemical. Many consumers complain of its foul odor and greasy feel. DEET can also damage some synthetic materials. Doctors recommend DEET only for limited use and in the lowest possible concentrations. There is even some evidence that heavy use of DEET can cause adverse health effects.

In short, DEET is very effective but also very aggressive. It is not recommended for children in anything but the weakest concentrations and without too many reapplications. Still, it is so effective that it is used today is many brands of anti-mosquito spray and other insecticides.

Do we use DEET in our applications? Emphatically, no!

What Chemical Do We Use?

Mr. Mister would not subject our customers to the level of risk than comes with DEET. Instead, we use another, more gentle chemical.

The African daisy is a type of chrysanthemum that contains a chemical known as pyrethrum. Pyrethrum protects the flower from attack by certain species of insects. The form of pyrethrum found in the flower is relatively weak. But its chemical structure can be reproduced in the laboratory to produce permethrin, a stronger chemical that is a very effective form of mosquito control.

This is the active base of our Atlanta mosquito control misting system. Our solutions contain 0.3% permethrin and 99.7% water—no oils or anything else. Our solution won’t stain or leave marks anywhere we spray it, and it contains no other harmful chemicals.

Permethrin is used to impregnate bed nets for children in many regions where mosquitoes carry malaria. The ability of these nets to repel mosquitoes is significantly increased by including permethrin, and the death rate for children from malaria is significantly reduced. Mr. Mister is a proud supporter of Malaria No More, an organization which distributes life-saving mosquito nets to third world countries. And we use this same chemical in our Mosquito control spray in Atlanta.

Permethrin is also used in medical shampoos, is impregnated into some types of outdoor clothing, and is even used to protect pets from insect and flea infestations. The EPA has found that the benefits of using permethrin significantly outweigh any risk involved in using it. Permethrin is also much less likely to get into your system than comparably effective DEET. Less than 1% of permethrin in topical applications is absorbed through the skin, compared to up to 20% for the more dangerous DEET.

The permethrin used in the Mr. Mister mosquito control spray is regulated and approved by the EPA (Environmental Protection Agency). It is a synthetic insecticide with a long history of safety. A risk/benefit balancing analysis conducted by the EPA saw the benefits of permethrin dramatically outweighing the risks, and it carries significantly less risk than DEET.

Our mosquito control safety system prevents the use of harmful substances. The mosquito misting system we use is as safe as you can get for children and even babies. For more advice on safely controlling your mosquito problem, call us at (404) 941-0720 or Click Here for a Quote.